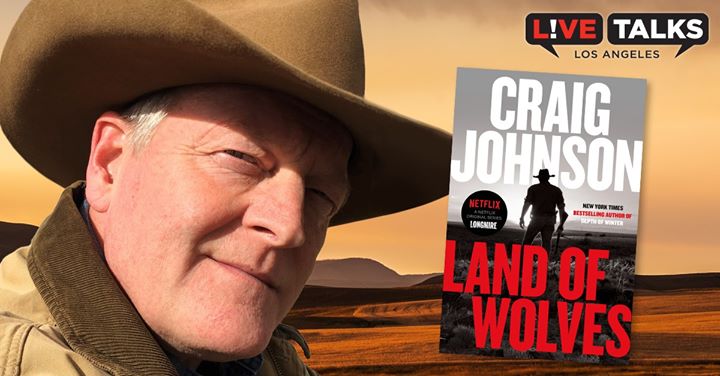 An Evening with
Craig Johnson

Discussing his latest novel in the Walt Longmire series,
Land of Wolves and he will be joined by cast members from the Longmire series airing on Netflix

at The Writers Guild Theatre in Beverly Hills

Craig Johnson is the New York Times bestselling author of fourteen full-length novels in the Walt Longmire mystery series, as well as three works of short fiction featuring the beloved sheriff. His acclaimed books have won the Western Writers of America’s Spur Award, the Will Rogers Medallion Award for fiction, the Watson Award for a mystery novel with the best sidekick, and the Wyoming Historical Association’s Book of the Year award. They have been named best books of the year by Publishers Weekly and Library Journal. Spirit of Steamboat was chosen as the first One Book Wyoming selection. The series has been adapted for television by Warner Bros. as the hit show Longmire, now an original program on Netflix. Johnson lives in Ucross, Wyoming, population twenty-five.

In the fifteenth installment of the Longmire series, Land of Wolves, Johnson once again draws readers in to the rugged and colorful world of Wyoming’s glorious landscape. With millions of devoted readers, the series is also the inspiration for Longmire, the hit Netflix show—now streaming all six seasons.

“Like the greatest crime novelists, Johnson is a student of human nature. Walt Longmire is strong but fallible, a man whose devil-may-care stoicism masks a heightened sensitivity to the horrors he’s witnessed.”
—Los Angeles Times

In Johnson’s last book, Depth of Winter, Walt’s beloved daughter Cady was kidnapped by his longtime nemesis, Tomás Bidarte, an international hit man and the head of one of the most vicious drug cartels in Mexico. In Land of Wolves, while attempting to recover from his harrowing experiences in Mexico,Wyoming sheriff Walt Longmire is neck deep in the investigation of what could or could not be the suicidal hanging of a shepherd. With unsettling connections to a Basque family with a reputation for removing the legs of Absaroka County sheriffs, matters become even more complicated with the appearance of an oversize wolf in the Bighorn Mountains to whom Walt finds himself feeling more and more empathetic.